The success story of the company “Residences Dar Saada” is intimately linked to B Group and its founder Mr. Abdelali Berrada Sounni

The origin of B Group dates back to 1960 with the launch of the first industrial activities.

In the 1980, the Group diversifies its industrial activities by initiating the development and the management of major tourism and residential projects, first in the segment of luxury then in “social housing”, including the Saada Residences projects in Casablanca and Mohammedia.

Inearly 2000, the Group's commitment to supporting the social housing sector has been strengthen by the creation of the company Tafkine Ltd., which became in 2004 Residences Dar Saada.

Since 2000, Résidences Dar Saada expands to achieve its primary mission which is to offer quality housing. This requires constant adaptation to the new requirements of the Moroccan customer and continuous process improvement.

In 2011, the company Résidences Dar Saada initiated a new development phase by the entry to its capital of Moroccan and foreign institutional investors through a capital increase of 900 million dirhams. This was accompanied by the establishment of an independent and autonomous management structure and high governance standard allowing acceleratingcompany development program.

In December 2014, Residences Dar Saada, on the strength its success and growth, began a new stage in its development by listing its stocks in the Casablanca stock exchange. Company IPO was through a capital increaseof 1.13 billion dirhams, which represent 20% of its capital. The funds financed through IPO are dedicated to acquiringlands in Morocco, accelerating the pace of production and finally for future developments in Africa.

Following the IPO in December 2014, the company’sfree-float represents 20% of the capital and the historical and institutional investors as well as theBerrada Family hold respectively 25% and 55% of capital.

As of end 2014,the distribution of ResidencesDar Saada capital is as follows: 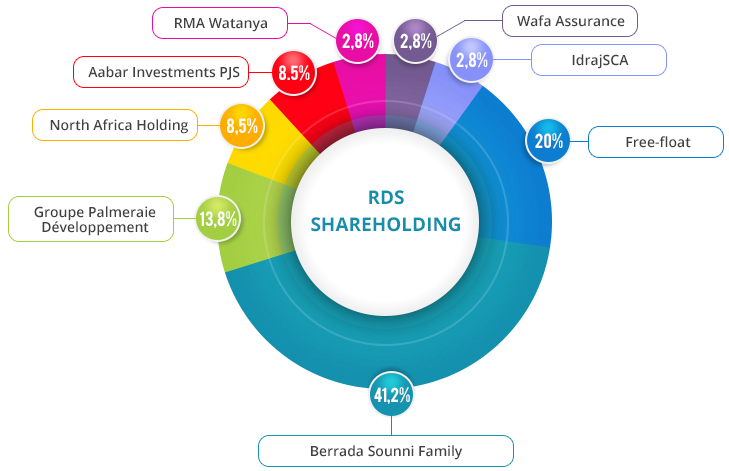 The BerradaSounnifamily is the historic and majority shareholder of Residences Dar Saada. It holds 55% of its capital, 41.2% are held through the “PalmeraieDeveloppement” Group.

PalmeraieDeveloppement Group is a B Group company which holdsactivities such as luxury real estate, middle standing and social housing in addition to hotelsactivity.